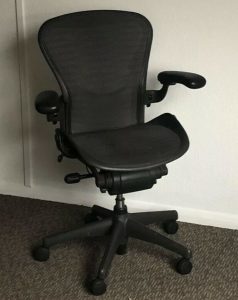 Have you seen the price of decent new orthopaedic office chairs?! We needed four genuine, quality chairs, as we have bought budget chairs in the past to our mistake.  We’ve recently found out that buying cheap is a false economy, broken arms, split seams, and dodgy mechanisms. We really needed decent chairs as we sit at our desks 80% of the day. The last thing you need when you leave work is an aching back. We are also aware that sitting in an average chair all day can contribute to future back trouble.

Not wanting to be bitten by the same dog twice we investigated. We trawled the internet and asked around. We made a short list of three office chairs: RH 400, Herman Miller Aeron and the Steelcase Leap. We went with the Herman Miller Aeron as this chair has won many awards and is recommended by most comparison and review websites.

We test drove it at the local department store and found it to be very comfortable. We did not buy immediately, spending over £4,000 on four chairs is a lot.

The Herman Miller Aeron Chairs were found at John Lewis and we were just about to place an order when coincidentally our client Ken at the officechairman.co.uk pointed out he had just bought 100 of them and they were in excellent condition.

He also stated that as we claim to be an environmentally friendly company, we would be reducing our carbon footprint as these chairs would not have to be manufactured for us. We would be saving on landfill if the chairs were to be disposed of. So, we are now the owners of four Herman Miller Aeron chairs. These are the office chairs that feature in most TV programs sets in offices e.g., Mad Men. Believe it or not they are even featured in the Simpsons. They look cool and are super comfortable.

In conclusion if you are looking for a super comfortable office chair and want to save the environment, buy a second-hand Herman Miller Aeron Office Chair

This website uses cookies to improve your experience while you navigate through the website. Out of these, the cookies that are categorized as necessary are stored on your browser as they are essential for the working of basic functionalities of the website. We also use third-party cookies that help us analyze and understand how you use this website. These cookies will be stored in your browser only with your consent. You also have the option to opt-out of these cookies. But opting out of some of these cookies may affect your browsing experience.
Necessary Always Enabled
Necessary cookies are absolutely essential for the website to function properly. These cookies ensure basic functionalities and security features of the website, anonymously.
Functional
Functional cookies help to perform certain functionalities like sharing the content of the website on social media platforms, collect feedbacks, and other third-party features.
Performance
Performance cookies are used to understand and analyze the key performance indexes of the website which helps in delivering a better user experience for the visitors.
Analytics
Analytical cookies are used to understand how visitors interact with the website. These cookies help provide information on metrics the number of visitors, bounce rate, traffic source, etc.
Advertisement
Advertisement cookies are used to provide visitors with relevant ads and marketing campaigns. These cookies track visitors across websites and collect information to provide customized ads.
Others
Other uncategorized cookies are those that are being analyzed and have not been classified into a category as yet.
SAVE & ACCEPT
×
×